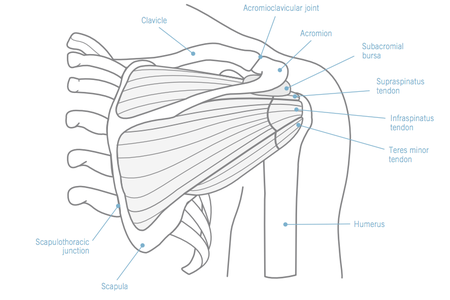 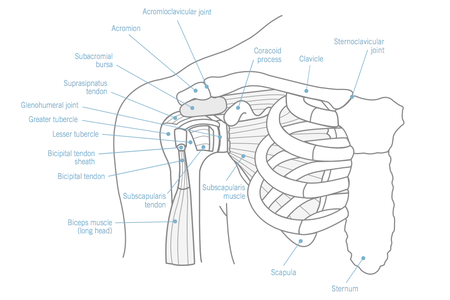 The shoulder joint is one of the most sophisticated and complicated joints in the body, offering high mobility but a lack of stability.  It has the greatest range of motion of any joint, allowing us to position our hands anywhere in space.

This bone, commonly known as the shoulder blade, serves as an attachment site for numerous muscles that support movement and stabilize the shoulder anatomy. The Scapula overlies the second to seventh ribs, and is encased by 17 muscles which provide control and stabilization against the ribcage. The bone also has a shallow socket on its lateral side, into which the head of the humerus fits to form the glenohumeral joint.

This is the upper arm bone, an important aspect of the shoulder’s anatomy because of the large range of movement that it permits. The head of the humerus is actually the ball of the ball and socket joint at the shoulder, and fits into the shallow socket (glenoid fossa) of the scapula.

The clavicle, or collar bone, is an S-shaped bone that serves as the main connection between the upper arm and the rest of the axial skeleton. The bone is an important site for muscle attachments, and meets the scapula at the top of the shoulder, where it connects to the acromion process, forming the acromioclavicular joint.

This joint is often referred to as the shoulder ball and socket joint, and provides a large proportion of the movement at the shoulder girdle. This shoulder joint allows the arm to rotate in a circular fashion, or to hinge out and up away from the body. The head of the humerus moves with the glenoid fossa of the scapula and is further supported by the glenoid labrum, a ring of fibrous cartilage which extends the fossa slightly, making it wider and deeper. The shallowness of the fossa, in combination with the relatively loose connections between the shoulder and the rest of the body, allows the arm to have tremendous mobility. However, it is unfortunately at the expense of being much easier to dislocate than other joints in the body.

​This joint is located at the top of the shoulder anatomy, and is the junction between the acromion and the clavicle. The joint functions like a pivot point by helping with movement of the scapula, resulting in a great degree of arm rotation. This, in turn, gives us the ability to raise our arms above our heads.

​This joint is at the sternal end of the clavicle, the cartilage of the first rib, and the upper and lateral parts of the sternum. It is the only joint that truly links the upper extremity to the axial skeleton, and is particularly important in throwing and thrusting movements.

Despite not technically being considered a real joint, the scapulothoracic joint allows for increased shoulder elevation. It relies entirely on the surrounding musculature for its control, and is formed by the convex surface of the posterior thoracic cage, as well as the concave surface of the anterior scapula.

If you would like to know more about the shoulder anatomy, schedule a consultation with Dr. Ackerman today!

Next, learn about Shoulder Treatments.